Thank you for reading!

Convenient Home Delivery of the Inyo Register PLUS E-Edition access and unlimited access to articles on inyoregister.com.

Starting at
$0.99 for 1 day
Get Started
View all rates
You have permission to edit this article.
Edit
Home
News
Sports
Obituaries
Photos
Videos
e-Edition
Classifieds
Subscribe
Share This
1 of 3 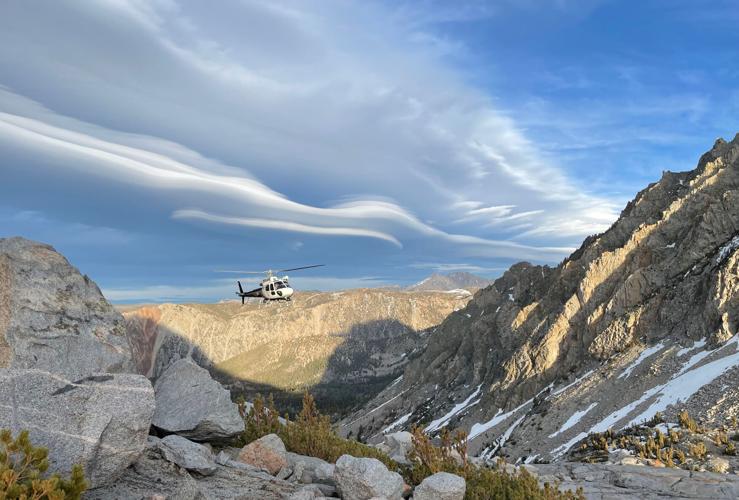 CHP H80 helicopter approaches Mt. Emerson with a wave cloud in the background during the weekend’s rescue operation that saw Inyo County Search and Rescue come to the aid of an injured climber. 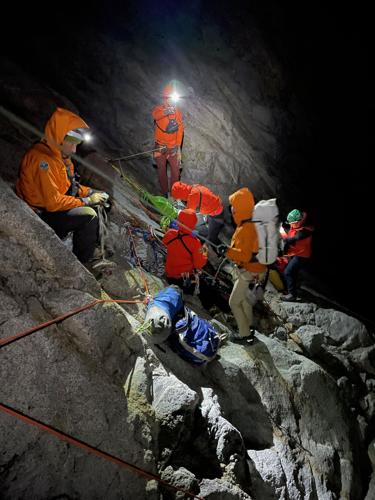 The SAR team prepares the litter for the first of many “lowers” during the rescue. 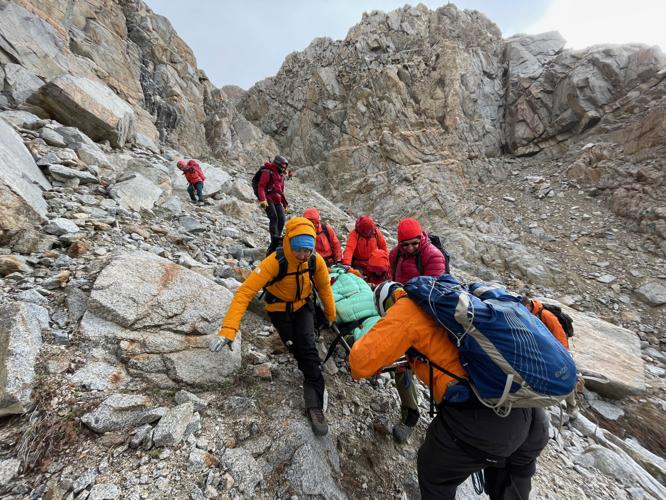 Inyo County Search and Rescue members start to carry out the injured climber at the base of Mt. Emerson.

CHP H80 helicopter approaches Mt. Emerson with a wave cloud in the background during the weekend’s rescue operation that saw Inyo County Search and Rescue come to the aid of an injured climber.

The SAR team prepares the litter for the first of many “lowers” during the rescue.

Inyo County Search and Rescue members start to carry out the injured climber at the base of Mt. Emerson.

At about 2 p.m. on Friday, May 27, Inyo County Sheriff Search and Rescue (SAR) coordinators received notification that an emergency satellite beacon had been activated on Mt. Emerson, reporting that a party of three climbers had a member with a broken leg high on the south east face climbing route, at about 12,000 feet.

The SAR team was activated and the first team members started to arrive by 3 p.m. A helicopter was requested and CHP H80 was able to respond.

The SAR team noted that a cold wind system was forecast to arrive and persist through the weekend, potentially affecting the ability of the helicopter to be able to hoist the patient, and thus making the possibility of the party spending the night out on the mountain a potentially life-threatening situation.

It was decided that the team’s “Plan A” would be to attempt a helicopter hoist, but that the more likely scenario should be prepared for, the “Plan B” – without a hoist the team would have to assist the party by climbing and descending the route. Plan B would be an all-nighter.

Shortly before 6 p.m., a hoist was attempted and failed due to gusty winds. The first SAR responder was left off at 10,500 feet, above Loch Leven Lake, near the Paiute Pass Trail. Over the next two hours five more SAR members and their equipment were inserted via H80 at the same spot via a challenging “one skid” landing technique. The last drop-off occurred in the dark.

The earlier-arriving SAR team members started climbing the southeast  face route right at dark, with the first SAR member arriving to the patient about 9:45 p.m. The patient was assessed and packaged in a vacuum splint, and rescue litter.

By approximately midnight the patient and other uninjured subjects were ready to begin the long process of descending the route with the SAR team. Due to extreme rock fall hazard, and the perils of working in the dark and cold, windy conditions, the descent was executed in careful stages, minimizing the number of people exposed to rockfall as much as possible.

One SAR member would rappel a 300-foot rope and establish an anchor in a safe spot. The uninjured subjects would rappel to that spot. Next the litter with the injured person would be lowered on two ropes, each rope controlled by a SAR member, with three SAR “attendants” helping with the litter. Each of these cycles took about an hour and a half.

The process was repeated five times, each just under 300 feet of lowering, and the patient reached the ground at about 9 a.m. From the base of the route it took 20 some SAR members, who had also worked through the night to be at the base of the climb, about three hours to carry and wheel the litter out to the trailhead and the waiting ambulance. There was one minor rock fall mishap, resulting in a painful but not serious injury to one of the SAR members.

SAR members point out that not all accidents can be prevented, but there are things people can do to stack the odds in their favor. They offer the following to keep in mind:

• Prepare for the worst: Having warm clothing would have really helped this party. Had they had to spend the night it is questionable whether or not they could have survived the conditions. Remember, you are not guaranteed a rescue! As was the case with this rescue, due to inclement weather or lack of available resources, it could take many hours for rescuers to reach your location. Whenever you venture into the wilderness, you should have a plan to solve your own emergency should the need arise.

• Reaching the summit is far less important than returning safely. Calling SAR or pushing your SOS button is the same as calling 911: only do so if you are in a life-threatening emergency or you need specialized assistance beyond what you are qualified to provide. Recognize when illnesses or injuries become too serious for you to handle on your own. Of course, some emergencies do require outside assistance, and this party did the right thing by calling for help.

• Though Mt. Emerson is often viewed as a moderate alpine climb, it is a serious undertaking. The difficulty rating belies some of the challenges climbers face on this route. Many climbers are not familiar with the tools and techniques to manage the rock fall hazard as well as the hard to protect ridge climbing high up on the route. Route finding is challenging. Mt. Emerson is the site of frequent rescues and should in no way be considered a route for a beginner other than if you are being led by a qualified guide.

Sorry, there are no recent results for popular articles.

Sorry, there are no recent results for popular images.

Sorry, there are no recent results for popular videos.

Sorry, there are no recent results for popular commented articles.